A Brief History of the A40 Farina

The Austin Motor Company was one of England's earliest car manufacturers, being founded by Herbert Austin in 1905 at what was to become their lifelong home, the Longbridge Works in Birmingham.

In 1952 the company merged with Morris Motors Ltd to form the British Motor Corporation. The A40 Farina was destined to become the very last true Austin; later BL cars carried different marque badges depending on their levels of equipment and refinement.

The A40 Farina was developed between the years 1955-58 at Longbridge under the Austin drawing office's code ADO 8, and was intended to replace the company's earlier A30 and A35 models.

One of the world's most distinguished designers, the Italian stylist Battista Farina, was commissioned to create the new-look "baby Austin" though mechanically the vehicle was to inherit much of the A35's front (coil spring) and rear (leaf spring) suspension, shock absorbers and steering system, the rear brake system, wheels and hubcaps, speedometer, wiper motor, and headlamp assemblies. The car measured just over 12 feet long, 5 feet wide and 4 feet 9 inches high, and weighed in at 15 hundredweight.

Production commenced on 2nd June 1958 and by December about 400 units per week were being built. They began appearing on the public roads towards the end of 1958 and the standard model cost, including Purchase Tax, £676 7s 0d - a heater was £20 extra and, for another £13 or so, the new owner could have a passenger's sun visor, opening rear side windows, and over-riders.

The Mk 1 A40 Farina was propelled by the wonderful little 948 cc A-series engine (which grew from a design originated in 1947 by Eric Bareham) and returned an average of 45 mpg, did 0-60 in 35.6 seconds (!) and could reach 73 mph, though a more realistic cruising speed would be the mid-fifties.

The new model was unveiled at the Austin Works on 18th September 1958 and went straight to its first motor show, the 45th Salon de l'Automobile at the Grand Palais in Paris from 2nd-12th October of that year, closely followed by an appearance at the 43rd International Motor Exhibition held at Earls Court, London, which opened on 22nd October.

The line drawing shows a Countryman version of the saloon (with top-hinged rear window - arguably the first "hatch-back" in mass production) which was announced in September '59 and, two years later, the Mk 1 was discontinued after 141,899 saloons and 27,713 Countryman models had been built.

Today, we estimate that only about 400 of the cars still exist. 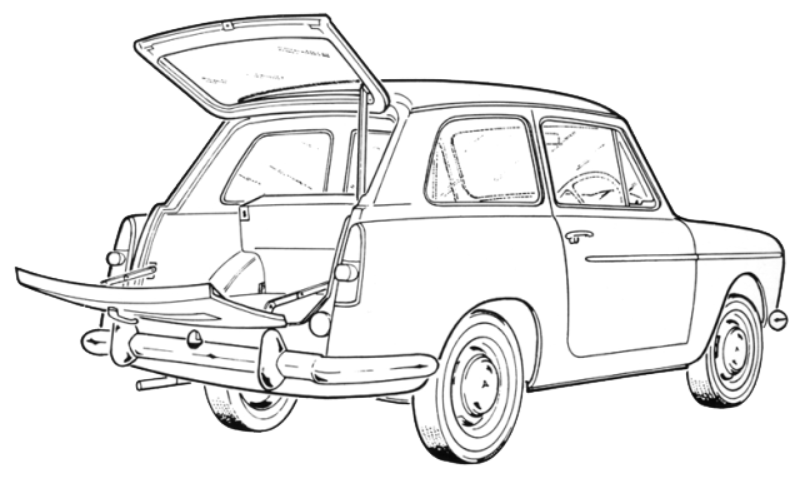